Zaplana invites you to explore hidden treasures of history and enjoy pristine landscapes. Follow the traces of the most impressive Roman monument in Slovenia. 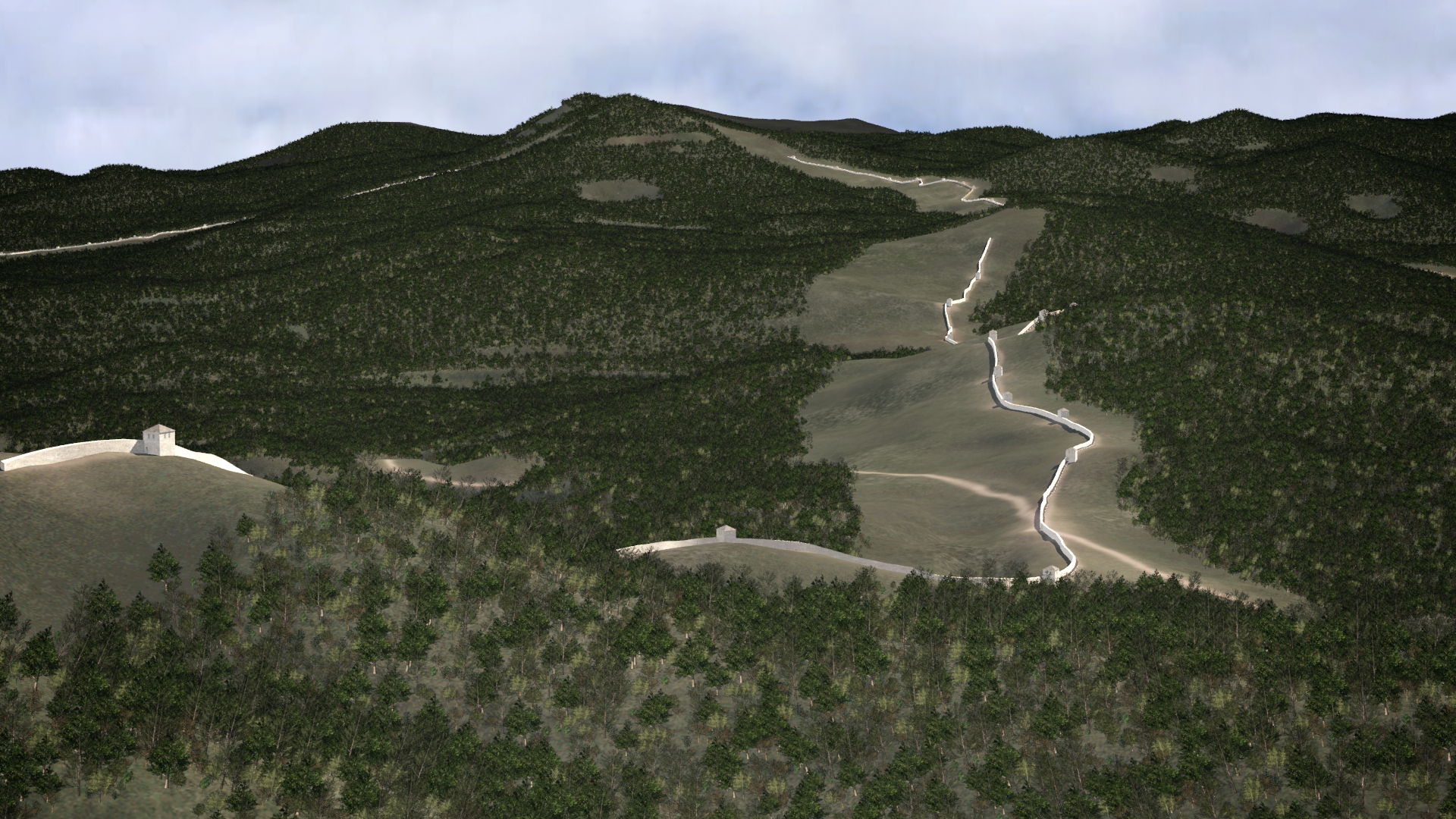 Difficulty: easy, hiking gear should be appropriate to the season and forest terrain

Walking the trail is at your own responsibility

1. Ajdovski Zid with the Tower

On the slopes of Zaplana, from Cesarski vrh, along Strmica till Marinčev grič, you can spot the unusual ridge, covered with turf and scrub. These are the remains of the once magnificent construction that was built in the 3rd and 4th century by the Roman soldiers. This 2-3 m tall and 1 m wide defense wall with towers was in place to protect the heart of the Roman empire from Eastern invaders.

In the past local people believed that the wall was built by the giants called “ajdi”, the oldest inhabitants of Earth.

You can see well preserved archeological remains of the wall and tower.

Subterranean water dissolves the Karst’s limestone, forming hollows and caves. At the same time the surface dissolves, gradually lowering over time. Dissolving of the surface makes the ceiling thinner and it gradually collapses. The cave then loses its ceiling and becomes a part of the karstic surface itself.

The world of the Karst is not the most hospitable, as the terrain is rugged, there is no fresh water, and the land itself is almost completely unarable. The Romans nonetheless found something they needed here: construction material! They used the endless amounts of rock in the Karst to build their walls to provide protection to the towns and cities in the Empire. The fortifications were usually made from two parallel wall facings, between which pebbles and gravel were added, and then lime mortar was poured throughout. This construction method made for extremely rigid walls.

Spruce trees grow over larger areas in our forests than they would without human assistance. In the Roman times, there were no spruce trees here along the Ajdovski zid wall, they grew only individually or in small groups in the mountainous terrain and in the lower areas in the freezing ravines (Notranjska). Due to their rapid growth and easy cultivation, they became popular in the 19th century. The felling of other trees and the acceleration of spruce trees caused this conifer to grow over large areas of Slovenia. However, where spruce trees are not found in their native habitats, they are threatened by bark beetles, fungi and windfalls.

4. The View Towards Ljubljana Marshes

From the viewpoint under the Strmica slope opens up the magnificent panoramic view towards the Ljubljana Marshes, that is also the view into the rich past of the region. Former Emona and Nauportus emerge in the distance, once navigable and busy river Ljubljanica dominates the landscape, the view reaches the archeological site where the world’s oldest wooden wheel was found …

Horseshoe bats have a maternity colony in the Church of St. Martin and Urh. Their main haracteristic is the distinctive horseshoe-shaped nose. Nocturnal butterflies, moths and mosquitoes make up the bulk of their diet, as they hunt them in the nearby meadows and woods of Zaplana. When sleeping they lock onto a ceiling, wraped up in their wings.

Beech is the most common type of tree in Slovenia. It is capable of reaching heights of up to 40 m tall and 1,5 m trunk diameter. It has a lifespan of 300 years or more. It forms a symbiotic relationship with the fungi from the genera Amanita, Boletus and Chantarellus. The biggest one in Zaplana, boasting a girth of 353 cm, is on the abandoned homestead of the Celarcs.

Ajdovski zid was built by Roman army 1700 years ago. Roman soldiers usually marched on foot, carrying with them everything they needed for battle and travel. In addition to all the weapons, soldiers carried a 3-day supply of food or more, tools, and cooking utensils. All of this equipment could total up to 30 or 50 kg, with the soldier travelling substantial distances on a daily basis.

Along the trail you can test yourself as a Roman soldier. If you want to know how heavy a soldier’s equipment was, try to lift the weights. Then imagine that you have to carry that much on your back until your next stop.

Hazel trees along the Ajdovski zid wall speak of the overgrowing of space. In the 20th century, there were meadows and pastures here and deforestation occurred. However, as the management of meadows was abandoned after World War II, the areas began to be overgrown. In the case of Dinaric fir-beech forests, the species that is among the first to grow over a pasture is hazel. With its fallen leaves, it restores the ground and prepares it for the arrival of more demanding tree species (beech, fir, oak).

We received the Stele Award for 2020!

This website uses cookies to improve your experience while you navigate through the website. Out of these, the cookies that are categorized as necessary are stored on your browser as they are essential for the working of basic functionalities of the website. We also use third-party cookies that help us analyze and understand how you use this website. These cookies will be stored in your browser only with your consent. You also have the option to opt-out of these cookies. But opting out of some of these cookies may affect your browsing experience.
Necessary Always Enabled

Any cookies that may not be particularly necessary for the website to function and is used specifically to collect user personal data via analytics, ads, other embedded contents are termed as non-necessary cookies. It is mandatory to procure user consent prior to running these cookies on your website.